Having more than one NAT/router in a network can create issues that will affect your VoIP connection.  You may experience issues right away, or they may develop sporadically over a period of time.  These issues can include one-way audio and calls dropping for no apparent reason.  Setting up your network correctly can be beneficial for your VoIP quality and connection, as well as the overall stability of your LAN.  We have added information on best practices, including how to configure your second wireless router after adding a VoIP Linksys  RT31P2 ATA/router.

Routers, switches and other Devices:

Starting with the Internet connection you will usually find a DSL modem, cable modem or another firewall/router device.  These devices can have both firewall capabilities and be NAT/routers, supplying DHCP addresses to the internal LAN devices.  The problem for VoIP is that they may use an 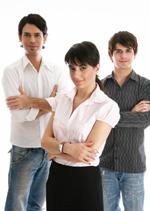 unfriendly NAT transversal or SPI (stateful packet inspection), preventing the voice packets from making it back to the ATA correctly.  (Netgear routers use both a problematic NAT and SPI.  You may need to place the ATA into a DMZ zone on a Netgear.

In most cases, if more than one NAT/router is between the ATA and the Internet, this double NAT issue will create connection problems and one-way audio.  Add to that the fact that double NAT is not considered good network practice, you will want to make sure to limit the amount of devices supplying DHCP.

Many of our featured business VoIP providers below include a free setup and router with their service plans:

Having problems with your VoIP connection then look at these possibilities:

Most DSL modems act as a routers for the internal LAN, while most cable modems do not.  (This is the primary reason why a cable VoIP installation will be much easier than a DSL install.)   Some DSL modems and certain types of NAT/routers can use a SIP unfriendly NAT.  The result can be one way-audio, where the other party may hear you, but you cannot hear any incoming audio.  This is an issue caused by the return voice packets stopping at the router, firewall or double NAT router and never finding their way back to the ATA.  If you suspect this, then:

If you need to add a wireless or second router to your LAN and are using a Linksys router/ATA, then the best configuration would be as follows.

VoIP protocols often will not function correctly in networks that include some types of NAT transversal or firewall components. The result is usually that calls can have one-way audio or fail.

One-way audio is usually the result from a double NAT issue or an unfriendly NAT transversal being used on the network.  VoIP itself presents a problem for NAT, in that the normal protocols it uses deal with the signaling and establishing of the connection.  These packets are generally identified by the NAT/router with the ATA device and will be forwarded correctly.  But, once the connection is established, the audio, which is an entirely different protocol and can be on a port initiated from an outside source, confuses the router.  It does not recognize the incoming packets as belonging to the ATA, and so they get dropped.

To alleviate some of these NAT issues some VoIP providers run Session Border Control servers.  These devices both handle traffic and shape the packets to  get past NAT transversal and firewalls.

How to troubleshoot one-way audio.

The first step would be to try to limit the devices between the ATA and the Internet.  To do this connect the ATA directly to the first device, which would usually be a modem.  (You may have to do a power cycle of the modem to get the VoIP ATA to connect. more)  If after the ATA connects and establishes dial tone you have two way audio, then you know that it works at that point in the network and you will need to locate the device that is blocking the transmission further down line (usually a second router).

If the VoIP ATA does not establish two-way audio connected directly to the modem (first device), then look at these possible issues and solutions:

Step by Step Screenshots on Bridging a Westell 6100

How to set QoS for VoIP on this popular router.  Although the QoS capabilities are not as geart as we would like, having the ability to prioritize traffic to benefit your VoIP connection is a big benefit. [instructions]

One-way audio is usually the result of two or more NAT routers or a router that uses a SIP unfriendly NAT.  Other possibilities can be a firewall that creates havoc with the voice packets and they do not make it back to the phone.

VoIP itself presents a problem for NAT.  The normal protocols it uses (SIP) deal with the signaling and establishing of a connection of the ATA.  The router or firewall will not recognize the incoming voice packets as belonging to the ATA, and so they get dropped.

Netgear routers can present problems for some VoIP because of the type of NAT translations and SPI that it does.  To resolve issues with Netgear routers place the ATA into a DMZ zone.

If you are using two devices on the same network make sure that they do not share the same IP address.  This will lead to routing problems on your network.  For example if the two devices each have a LAN IP address of 192.168.1.1, the change the second device to 192.168.1.254, thus keeping it on the same subnet, but stopping the IP conflict.

The most stable and best configuration for connecting a router/IAD would be to have it connected directly to the modem, and any other router connected to it with DHCP disabled.  For full instructions see the following:

If you are using more than one ATA behind the same router then you may want to set the port ranges on each ATA device so that they will not conflict with each other.

Using multiple ATA's in the same location is usually not a problem if the following conditions exist:

It's when multiple ATA's are sitting on the same internal network sharing one Internet connection that special configurations and considerations are needed.  (For small businesses the first limitation will usually be sufficient bandwidth.)