IP Phones - to connect to VoIP


IP-Phones are phone desk-sets that uses VoIP technology that allow calls to made over Internet connections instead of ordinary copper PSTN lines.  They can be further divided into Softphones and regular hardware desk-sets, but both use software based applications to handle voice conversion from analog to digital.  These applications are typically SIP (Session Initiation Protocol), SCCP (Skinny Client Control Protocol) and IAX (Inter-Asterisk eXchange Protocol), H.232, among others, with SIP becoming an industry favorite.

Many hosted VoIP providers support Polycom SoundPoint IP-Phones as their standard, but some have started to offer other manufacturer's phones as well.  There are several IP-Phone manufacturers, but probably none have the superior voice quality as a whole as Polycom, with their HD (High Definition) models being the best of breed when you want exceptional sound.  One model that many users find attractive, both in features and price is the IP 330.

Below are our featured IP phone and VoIP hardware vendors:


Typical IP-Phones have many of the same features as traditional business phones, plus some features an analog phone can't support, although manufacturers and models will vary greatly with the display size, number of buttons and BLFs (Busy Lamp Fields).

Some common features of IP-Phones are:

Given that most IP-Phones offer a set of features that will handle many of a customers needs, and come in varying prices, some considerations should be given when choosing a specific IP-Phone.  One primary one would be, of course, does your IP-PBX vendor support the model, and or if you are choosing a hosted VoIP solution which models will that provider support. The others might include:

There are a few features that are essential in most given cases and close attention should be paid that you get the right phones for your situation.  These would include the following:

There are several manufacturers of quality IP-Phones, each with several models and pricing points to choose from.  These manufacturers may vary somewhat to the features and options which the phone can handle certain tasks, but most will do pretty much most of what a business would require.  The exceptions would be BLFs and side panel addition which would allow an attendant console to be configured for the receptionist who is use to being able to see who is on what phone.  But, even this can be accomplished by using a web-based panel that displays the information, like HUD-lite.  Some IP-Phones that are widely used and have good features, good quality and good prices are Polycom, Aastra, and Polycom. 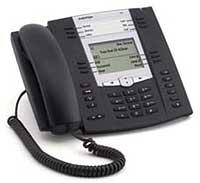 A few additional thoughts on which phone might be right for you.  As phones become fancier (more buttons, larger LEDs, more soft keys), one cost increasing improvement is a larger graphic display.  The larger it is, the easier it can be on the eyes, although the price of the phone will go higher.   Now some models are backlit.

Polycom is now offering their HD Voice on some models, a new and improved voice quality.  These phones have even better voice quality than other Polycom models.  They have perhaps the best voice (sound) quality of any IP phone available.

Some of the other advantages of IP-Phones are the ability to move one desk-set to another location and nothing on the phone needs to reconfigured.  Since most phones are set to use DHCP, they will find home through either an IP address or a DNS name and be handed an IP.  They are just like a PC, move one from one location to another on the LAN and nothing else has to be reconfigured.  THis is a big advantage over traditional PBX or Key phone systems where the cross connects need to be changed.  This saves money, service calls and frankly makes life a lot easier.

Some important thoughts on IP-Phones to consider:

Which phones are the hardest to configure correctly with Asterisk?

Which phone to pick.