Do you ever experience calls that drop in the middle of a sentence, either to a fast busy sound or lost audio?  Have you dialed a number that you know is good only to get a fast busy signal or a recorded message that the number cannot be reached?  Then use the following information to try to solve and correct these annoying connection problems.

Trying to identify the cause of dropped calls can be one of the most difficult tasks in VoIP troubleshooting.  Everything needs to be considered, from problems with in-home wiring and conflicting devices, to network routers and IADs.  Internet connections on the ISP level, all the way to and including routes on the backbone carrier and the subsequent PSTN service could be the culprit.  We will help you identify some of the causes connections can have problems and give you information that can be used to isolate the  possible cause.

Dropped calls to a fast busy:

Troubleshooting dropped calls can be broken down into a few categories.  The first is where the call goes immediately to a fast busy signal upon dropping.  For example, if there is a call made and a valid connection established, then after a period of time the call goes directly to a fast busy signal the issue may most likely be one of the following:

Try connecting a corded phone directly to the ATA device and see if the issue repeats.  If it does not, check all the devices connected to the VoIP connection, trying to limit them systematically.  After reconnecting the entire VoIP connection, add each device back one at a time, giving time to test as you go.  Some known devices that can interfere with a VoIP connection are:

Calls dropping after after a specific amount of time:

If your call drops after a specific amount of time, like 120 or 180 minutes, then this could be caused from a disconnect that is intentionally set by the provider or a partner of the provider.  These disconnects are set up as a precaution against open calls that may not actually be valid, rather they are calls that should have been finished but the signaling never correctly disconnected the call.  Rather than have an open call for 10, 12, 24 hours or more, the provider or a carrier partner of the carrier has built in disconnects at a specific time that limit call times.  This limit is actually a safe guard as it prevents indefinite billing times on calls that may not actually be a valid call.  Check for these indications:

If you notice frequent disconnects, timed specifically at an even interval such as 120 minutes, and you make calls that surpass this time limit, check with your provider.  The work around is to hang up the call before the imposed limit and redial, establishing a new call, starting a fresh timer.

Sometimes the best advice is "keep it simple".  Take things one step at a time, because if you try to change multiple things all at once, you may actually complicate the original issue.  You don't want to compound one issue into multiple problems.

If after a call is established, you experience either one-way audio or dropping of audio in both directions, then this indicates that something has broken the audio stream.  These issues can be caused from anything from the lack of adequate bandwidth to routing issues with the RTP protocol, which carries the voice.  In many cases problems with your outgoing voice dropping off can be due to an insufficient bandwidth, 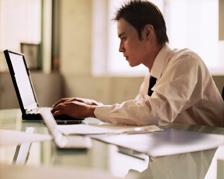 especially if after maintaining the connection the audio comes back.  Sometimes this can be best described by a "choppy sound" or periods of no audio.  Read more about this issue on Wan Connectivity and the Internet.

With a few tools and some good information you should be able to troubleshoot your connection.

If the incoming audio is lost after it was established, then some of the things to look at should be:

If the incoming audio fails from the very beginning, then look at the following:

You can limit the possibilities by checking your Internet connection for high latency, especially if these issues just started occurring or occur only during high Internet use time.

If a router is the issue, you could connect directly to the modem, as a check.  In some cases, a reboot of the router along with the IAD will correct these issues and allow the router to reestablish it's routing correctly.  Another possibility is to place the ATA in the DMZ zone of the router.  This can work well on some devices, especially if they actually treat the DMZ zone device as it is supposed to be treated (left outside the LAN open to the Internet).

*If you have more than one ATA VoIP device connected in the same LAN network they could be using the same SIP or other protocol ports.  This will eventually lead to problems, both signaling and audio.  You may want to contact your VoIP provider, as they may be able to vary the ports, so the different ATAs will not step on each other and your router will be able to more easily route correctly each device.

Calls that do not complete:

There are times when you may not actually make a connection.  Failed calls can be the result of several reasons, including the following:

If you experience a fast busy or other message that indicates a failed call, on certain numbers but not others, then most likely the issue is with the way the call is being handled by your provider or another carrier.  (If you find this happening with some International calls continuously and you have made certain settings like only using G711, then make sure you allow G729 as a negotiated codec, as many International routes only use G729.)

If your number was recently ported and you are experiencing inbound or outbound connection problems, then the issue could be a needed LERG update.

Audio that gets cut off or clipped:

If you experience or are told that your sentences cut off before you finish or get "clipped", it may be the result of a poor silence suppression.   This happens because  the algorithm that is used to create a comfort noise or conserve bandwidth is deficient.

What is the VoIP device called?

The VoIP device can, and is called by several names and references.

We will, from time to time, use any and all of the above to reference the VoIP phone device.

What about a PC or computer phone?

When a VoIP connection is using a virtual phone based on a computer, we will refer to it as a Softphone.

What is the correct way to do a Power cycle?

The correct way to do a complete power cycle is:

Then check for Internet connectivity through the computer and dial tone from the phone.

Sometimes the best advice is to "keep it simple".  Take things one step at a time, because if you try to change multiple things all at once, you may actually complicate the original issue.  You don't want to compound one issue into multiple problems.

If most callers can connect with you, but a few cannot,  then the issue could be with routing from the caller's carrier.  The caller should contact their carrier and explain the problem along with your number which they cannot reach.  This should correct the issue.

If your number was recently ported and you are experiencing inbound or outbound connection problems, then the issue could be a needed LERG update.

The most stable and best configuration for connecting a router/IAD would be to have it connected directly to the modem, and any other router connected to it with DHCP disabled.  This will prevent double NAT issues, which could result in dropped audio and problems with your VoIP connection.  For full instructions see the following: