MOS or Mean Opinion Score gives VoIP testing a number value as an indication of the perceived quality of  received voice after being transmitted and compressed using codecs.  This measurement is the result of underlying network attributes that act upon data flow and is useful in predicting call quality and is a good VoIP test tool in determining issues that can affect your VoIP quality and your conversations.

Testing the quality of VoIP has become easier and services have greatly improved over the last few years due to both the providers becoming more reliable and the ISPs offering better connections.  This advancement in the quality of services has helped increase the number of VoIP subscribers, but occasionally issues affecting voice quality do arise and being able to test your VoIP and identify these instances can be helpful in addressing them.  Having a metric to measure changes or degradation in the quality of the voice/VoIP connection after testing can help identify problems.  VoIP calls often are in the 3.5 to 4.2 MOS range.  The following chart can be used as a guide for VoIP MOS testing and a good comparison for voice quality.

You can test your VoIP connection and get your MOS score.

First, it is important to understand that MOS - Mean Opinion Score - is a relative scale and  is built upon many factors which can affect voice quality.  VoIP measurements are collected for after testing the one-way delay or the latency of the connection, packet loss with a metric to include the number of consecutive packets lost, and the amount jitter (difference in time it takes packets to arrive).  Calculations then factor an R Factor that can be used to estimate a MOS score.

Propagation delay which is is the time required for a digital signal to travel end-to-end across the entire network. The greater the distance the greater the propagation delay. Additionally the data has to travel through network routers, switches and other devices like firewalls, each adding its own (transport) delay.
Packetization delay which is the time required to digitize the signal for the codec used for sending over the internet and decode it at the far end. A more compressed codec like G.729 has a higher packetization delay than a non-compressed codec like G.711 codec.
Jitter buffer is the delay introduced by the ATA device to hold one or more datagrams, to compensate in variations of arrival times. In VoIP a jitter buffer is an area where voice packets can be collected, stored, and then sent to the processor in more evenly spaced intervals. Variations in packet arrival time (jitter) is usually the result of network congestion or route changes. The jitter buffer, which is located at the receiving end device of the voice connection, intentionally delays the packets so that received voice is presented correctly with less distortion.

The following items can all affect call quality: 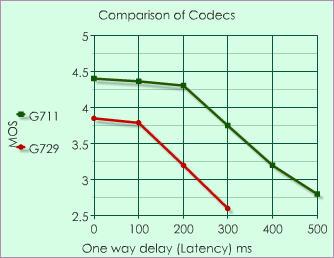 Most VoIP Measuring applications use MOS scoring based on the E-Model.  The E-model is an algorithm which is designed to evaluate factors of a transmission which lead to a deterioration of the quality of that data traffic, specifically in an cumulative or composite measure, and produce a result (R-factor) in the overall quality of a conversation.