VoIP Echo and how to correct it.

Echo exists in traditional PSTN connections as well as VoIP connections, but due to delay that is inherent in VoIP, it can become much more noticeable.  The echo that one experiences is probably the result of the far end, where an impedance mismatch bounces signals back from where they came.  The end result, due to noticeable delays, are echoes of one's own words audibly discernable.

Even traditional telephone connections have echo.  A call starts at one endpoint, typically a telephone and travels on a two wire connection, known as POTS (Plain Old Telephone Service) to a point where it will connect to a trunk line.  This trunk line is not a two wire pair, so there will be an interface (hybrid) to connect the two.  The call will continue to be transmitted over the trunk line and will travel to a point where it will once again travel through an interface back to a POTS line and onto the the far end telephone.  Of course this is somewhat simplified, but for practical purposes it will suffice to help explain how echo occurs.  During the change between various interfaces, a reflection of the signal can be sent backwards to the originating endpoint.  This reflection will not be noticeable unless the time between the original sound and the reflected sound is greater than 20ms to 50ms or so and the volume of the echo is sufficient enough.  If the echo is greater in time lag than 10ms to 20ms it will become noticeable.  As the lag becomes longer the echo will become more noticeable and more problematic.

Two wire to four wire trunk, back to two wire.

These echoes can happen at  several of the transition points along the journey.  Some echoes could be Hybrid Echo, usually the result of the telco's amplification of the signal that produces electrical leakage.  Typically telcos amplify the signal and break it into 2 pairs, one for transmit and one for receive, (two wire to four wire), so that the signal will transmit over long distances. This two wire to four wire hybrid can bounce back signal.  In an unbalanced hybrid situation part of the signal arriving at the four wire side of the hybrid interface will be sent back on a return path of the four wire circuit.

Since echo normally exists in a traditional telephony circuit and typically will not be noticed due to exceptionally low latency or echo cancellation, then why is it more noticeable in VoIP connections?  It's the travel time or latency that is introduced by a VoIP connection as it travels from the ATA over an ISP to a provider before it connects with the Telco circuit.  In this travel there are routers, and other switching that can add additional millisecond delays which add to the overall latency.  The echo is transmitted back over the VoIP network where it is received at the origination end and is heard as echo. 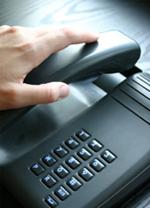 Many times the typical echo that one will experience will usually be the result at the complete far end of the talk path with the following problematic issues being the most likely cause:

An unbalanced hybrid creates a return of signal coming into the four wire side to be sent back on the return path of the four wire side.  This issue can be repeated in a VoIP to PSTN network where voice is reflected back from the hybrid interface between the VoIP and PSTN network, passing back over the VoIP segment.  This can also cause echo which will be noticeable at the callers ear.

So look what happens if the Hybrid in the PSTN-VoIP gateway is imbalanced: The caller's voice now travels out over a VoIP link, is reflected back by the hybrid, and passes back over the VoIP link, before arriving at the caller's ear. It's now more than likely that this will be perceived as echo.

Solving echo on a VoIP network is first and foremost finding the imbalance and if they exist on your network to correct them.

Some settings can reduce echo by adjusting the transmit levels on the ATA or Asterisk server.

Since echo can result even in a well balanced network due to the far end, using cards with echo cancellation is a prudent investment.  Echo cancellation uses an algorithm to correctly take away a portion of the transmitted signal from the return signal to eliminate the echo.

Experiencing strong echo with a specific number or phone usually indicates that the phone (hardware) at the far end has poor isolation/insulation of sound, known as sidetone, if: