The Vonage V-Portal and Vonage Box (VDV21-VD & VDV22-VD) are practically the same VoIP router devices as they have the same GUI interface and basic features.  The VDV21-VD has a LCD screen that displays information which the 22 model does not.  Both have a suite of diagnostic tests, many of which like ping, traceroute, etc. can be done right from your computer (see our VoIP Networking Help), but one test that is unique is the GR-909 testing suite (Some Motorola models are also including a GR-909 test suite.).

The GR-909 test is based on a suite of standards based electrical tests and have now been adapted to the VoIP industry.  These tests can indicate several common issues with VoIP connections and save a lot of time troubleshooting line problems, like an off hook phone or voltage on a VoIP line.  The GR-909 test has five tests, each of which can be tested separately for each line or all can be chosen for a suite of tests.

From the Drop Down menu choose GR-909 Test.  Each test can then be chosen for each line.  The Start Test button will begin the tests.  You may experience a flicker after each test.  At the end of testing the results will be displayed. 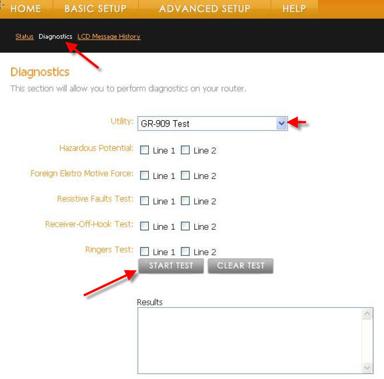 The following screenshot shows the results where all test were performed and passed on Line 1. 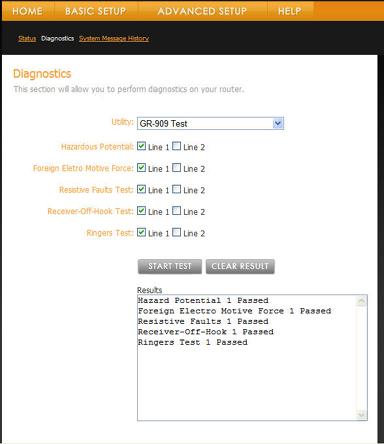 For a copy of the user guide manual for the V-Portal (this user guide is the same for the VDV22-VD (Vonage Box), except the Vonage Box does not have a LCD screen.

How to set PPPoE on a Vonage V-Portal

What unwanted voltage can do on your phone lines: