Connecting an Asterisk server to your overhead paging system.

Asterisk IP-PBX installations are increasing in number, not only because Asterisk is probably the best valued overall PBX system available, but Asterisk is the best IP PBX operating system and is open source so has no costly license fees.  Installing an Asterisk phone system for the first time can be a challenge, especially when interfacing to traditional analog systems such as overhead paging systems.  The paging connection to VoIP can be accomplished using an analog interface as described below.  VoIP Mechanic has put together some information that should help you when connecting an Asterisk box to a paging system.

How to interface Asterisk to a paging system.

Many facilities have overhead paging systems, whether they are single one-way zone paging speakers, talk-back speakers or multi-zone overhead paging systems and as such, need to be connected to your Asterisk Business phone system.  There are several ways to accomplish interfacing an Asterisk IP-PBX system with overhead paging, VoIP Mechanic describes one way which has worked well for numerous installations and uses a Linksys by Cisco PAP2T as an analog gateway device to sit between the Asterisk box and a paging interface device.  One excellent paging interface device is the Bogan TamB telephone access module.  It is a dual purpose voice paging adapter designed specifically to sit between a telephone system and a phone system.  It can provide either trunk port or station port access to a paging amplifier, amplified speakers, multi-zone paging adapter or talk back speakers, whether amplified individually or by a amplifier device.
Configure the PAP2T as an extension.

Connecting the PAP2T to the TamB interface. 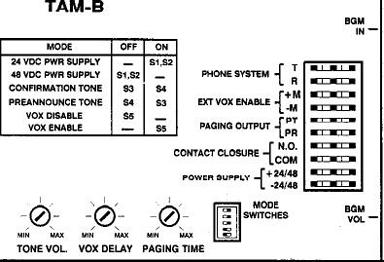 The connection from the Cisco PAP2T connects directly to the TamB using the Tip and Ring connections where the phone system is listed.  From there the connections to the paging system would be handled as usual with more specifics found from the Bogan TamB manual.

For interfacing with overhead paging you can make an Asterisk Extension go to the sound card and then wire its output to a traditional external paging system.  You can also get boxes to interface with a phone FXO or FXS port directly to a sound system.

You can find lots of help and how to on specific configurations at the VoIPwiki.